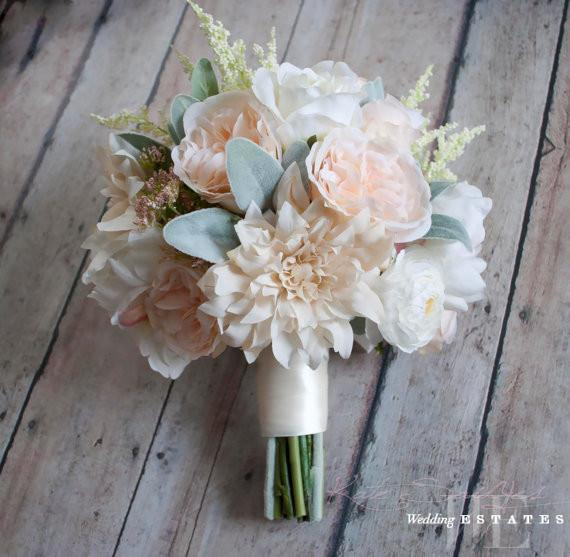 Wedding bouquets are one of the most important styling details every bride pays a lot of attention to. Nowadays, flower bouquets are definitely an inevitable part of every bride’s appearance. The detail of a wedding bouquet carries a significant importance, and also has a very high decorative purpose. Today we’re going to show you inspiration for Dahlia Wedding Bouquets, so check it out…

In the past, brides used to carry flowers on their wedding day because their magical effects – to protect them from illnesses and misfortune. At least that was a belief once upon a time. It was a widespread belief that the intensive fragrances of various plants will chase evil spirits away and bless the new couple. In fact, brides and grooms had been wearing flower garland around their necks during the Romanesque period. Also, this tradition symbolized new life, hope and faith. In some tropic islands, these types of traditions still live on and are still carried on.

Today, different types of wedding bouquets are considered to bring happiness and satisfaction in marriage, while the ribbon with which the bouquet is tied, symbolizes fellowship.

A tradition of groom’s wearing decorations (usually made of the same flowers) on his lapel first appeared in the Middle Ages. Then, knights were wearing colors of their ladies in their armor during tournaments. For example, grooms and their birders used to exchange flowers that had specific meaning to them specifically during wedding ceremony in Victorian ages.

The Dahlia flower is known to be one of the most beautiful flowers in the world. There is something special to it, which cannot really be described by words, it can be truly appreciated only by looking at a Dahlia flower.

Finally, a bridal bouquet that is made of dahlias will embody refinement and sophistication. Each bride is going to be able to make for her wedding the perfect composition of these magnificent flowers.