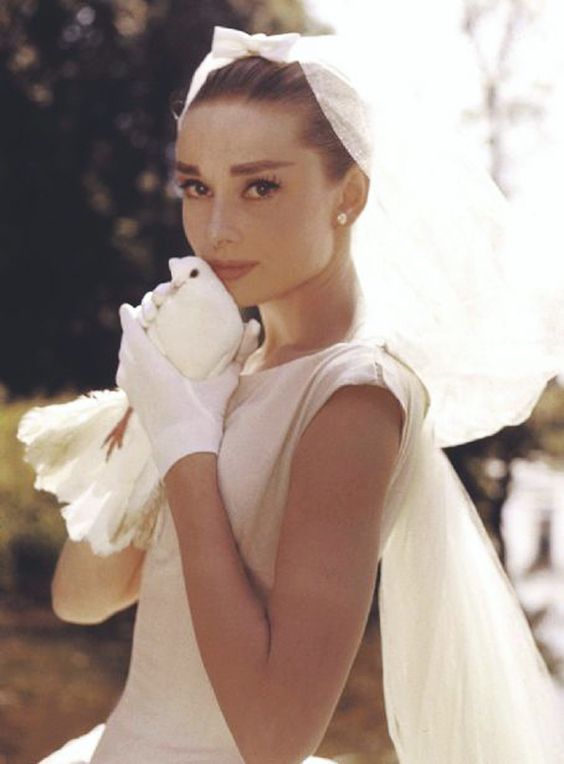 “The best thing to hold onto in life is each other.” – Audrey Hepburn

Iconic dancer and actress, Audrey Hepburn, is known for her captivating love stories and timeless style. She made an impact in the fashion world and redefined femininity through her class and elegance. Audrey Hepburn is mostly remembered for her black dresses and tiaras, but her classic style was evident in her three wedding dresses.

Before Audrey ever got married, she was engaged to a British businessman, James Hanson. During her engagement, she was filming Roman Holiday, and asked the Roman-based Fontana sisters to design her first wedding dress. It was a mid-length, silk dress that featured a boat-neckline. However, in 1952, she decided to call off the wedding due to the nature of her and her fiancé’s careers. She decided to donate her dress to Amiable Altobella, a beautiful, poor Italian girl who would never be able to afford an elegant wedding dress.

For the next two years, Audrey Hepburn dabbled in various romances, until she finally found someone she considered worthy of her heart.

“If I get married, I want to be very married.” – Audrey Hepburn

In September of 1954, Audrey found herself walking down an aisle in Bürgenstock, Switzerland to marry Mel Ferrer in a stunning Balmain gown. It was a tea-length, flared dress with ball gown sleeves, a high neck and a satin sash. Elbow-length gloves pulled the entire look together. Her marriage was defined by several miscarriages and rumors of infidelity on both sides. In 1968, after fourteen years of marriage and having one child with Mel, the couple divorced.

It didn’t take Audrey long to fall in love again. During her travels to Greece, she met psychiatrist Andrea Dotti.  A year after her marriage with Mel ended, she walked down another Switzerland aisle to marry Dotti in a Hubert de Givenchy dress.  Her third wedding gown was a pale ballet pink mini-dress with long sleeves, which she paired with white tights, white ballet flats and a coordinating headscarf. Infidelity was rumored once again, and after thirteen years of marriage and another son, the couple divorced.

Audrey spent the rest of her life with Robert Wolders, a Dutch actor. She claimed those were the happiest years of her life.

“The most important thing is to enjoy your life – to be happy – it’s all that matters.” – Audrey Hepburn