Somali Supermodel Iman and rock icon David Bowie were married twice– Once in a private ceremony in Lausanne, Switzerland and then in an intimate wedding with a small group of guests in Florence, Italy. David Bowie composed “The Wedding Song” especially for the occasion. Iman’s hairdresser, Teddy Antolin, who introduced the couple was an important guest. He also created the cascading curls to complement her sophisticated Herve Leger dress. White lilies and a formal dress tux worn by Bowie befitted the couple’s natural sophistication.  The couple has now been together for over twenty years, still going strong and now are considered a relationship success. In fact, in 2012 for their twentieth anniversary, Iman sent out this sweet tweet: TODAY is our 20yrs wedding anniversary “I believe in magic Angel for life” The Wedding Song/ Bowie #inloveforever–via Huffington Post 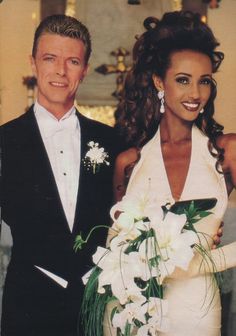