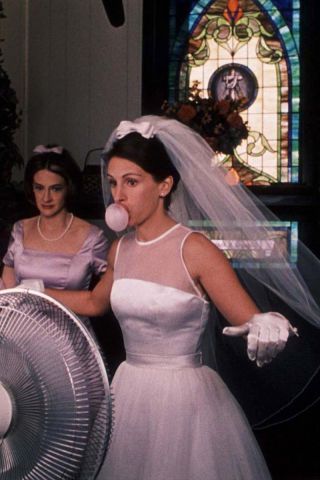 Wedding planning can burn out brides-to-be. For the nights when you just want to put away the planners and relax, snuggle up with your fiancé and watch one of our favorite wedding movies. You’ll laugh, you’ll cry, and you’ll maybe even get some inspiration.

First, the time has come for Prince Akeem (Eddie Murphy), the crown prince of African country Zamunda, to get married. Only he doesn’t want his parents to choose his wife. Akeem decides he has to break free from royal obligation to forge his own path — in America. While working at a fast food restaurant, Akeem falls for the owner’s daughter, Lisa (Shari Headley). The royal wedding is never far from the mind of this prince-in-disguise.

Next, reach a certain age, and your summers will become a parade of the wedding weekend after the wedding weekend. Four Weddings and a Funeral is about friends on this wedding-centric social circuit, and the major events that happen at each one – mostly involving the floppy-haired Charlie’s (Hugh Grant) pursuit of Carrie (Andie Macdowell), an American who is never quite available.

The movie subverts rom-com tropes and ends up providing an unexpected, nuanced story about relationships. Julianne Potter (Julia Roberts) and Michael O’Neal (Dermot Mulroney) had a lifelong pact to get married if they both were single at 28. Four days before Julianne turns 28, Michael announces his wedding — to another woman. Julianne decides she wants to marry him.

Harper Stewart (Taye Diggs) is a writer who is finally on the cusp of his big break, but the timing couldn’t be worse. Also, the semi-autobiographical novel, which fictionalizes him and his friend’s sexual exploits, is coming out the weekend of his best friend’s (Morris Chestnut) wedding. Secrets don’t just come out of the woodwork; they fly.

Perhaps I’m biased, but I think this is the most iconic wedding movie of all time. It’s not just about a wedding, of course — it’s about a woman finally coming into her own, years after she probably should have. Toula’s (Nia Vardalos) relationship with the dashing Ian Miller (John Corbett) spurs her must-needed rebellion from her loving, but definitely controlling, Greek parents. She blossoms personally and professionally. When they eventually get married, she’s her full self.